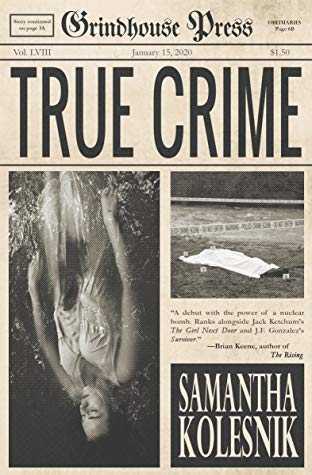 I could not wait to read True Crime, the debut novel by Samantha Kolesnik. I haven’t seen this much hype around a book in the horror community in long time - if ever. I was interested in this one as soon as I saw the cover reveal from Grindhouse Press, and when early reviews started pouring in I knew I’d need to read this one the day it was released. This was the first Kindle book I’ve pre-ordered - I wasn’t going to miss out on this.

After reading it though, I needed to digest it before even attemping to write a review. True Crime is an account of what might happen when someone is raised in some of the worst conditions imaginable. The story is told from the perspective of Suzy, who is abused pretty much from the day she was born. It is from her point of view that we, as the reader, are taken on this journey of survival, revenge, and redemption.

True Crime is already being compared to Jack Ketchum’s The Girl Next Door, but what makes Kolesnik’s novel unique is that we get to see everything from the eye (and mind) of the victim. There’s a lot of introspection by Suzy and the way she views the world and her entire outlook on life in general is enough to make you physically hurt. The abuse she’s gone through makes her feel worthless as a woman, and it doesn’t let her trust anyone - aside from her brother Lim - and why would she? You get the sense that Suzy always seems to be in the right place at the right time to see the worst in humanity. Kolesnik really dives deep into the mind of Suzy and you can feel the inner turmoil, indecision, morbid curiosity, and coldness as the story progresses, but you also get glimpses of hope and a possible brighter future. Suzy wants a better life, but doens’t know if it exists.

As the synopsis explains, Suzy and her brother Lim go on a murderous rampage - starting with their mom. From there, they hit the road and things get crazy. I don’t want to go too far into what happens because the novel is short, but I will say - surprise - there are more deaths than just Suzy and Lim’s mom. What makes it so unsettling, though, is the fact that Suzy and Lim don’t set out to murder people - they only want to escape to a better life. It’s when they encounter people - anyone - that you get the sense that something is wrong. Even when Suzy is talking to, for example someone at a diner, or on the side of the road, the conversation might be harmless but much darker things are going on in Suzy’s damaged mind.

Throughout the story, Suzy tries to get answers from her brother Lim on what they should do, and where they should go, but he’s much colder and unfeeling. He doesn’t say much. But Suzy knows he’ll always protect her, though she isn’t sure if he even loves her.

What did it say about me that my one true guardian angel was the earth’s devil?

I wish I had the paperback of this book because I’d probably have highlighted several quotes and sections because there’s so many that stand out. This is going to be one of those books that people talk about for a long time and I know I’ll be picking up anything Kolesnik puts out.