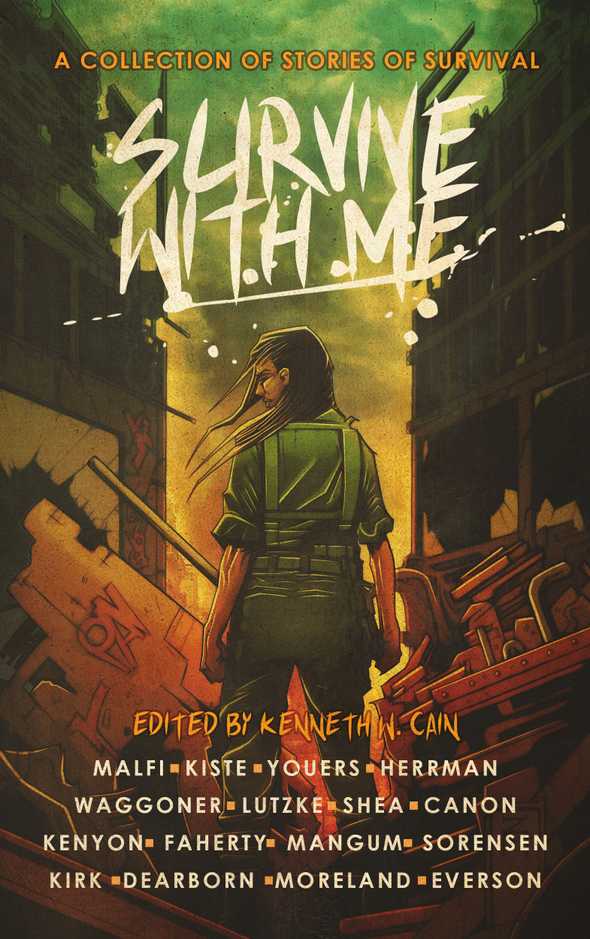 SURVIVE WITH ME is a charity anthology from Alien Agenda Publishing. All proceeds from the sales go to support the American Indian College Fund. This is an anthology that caught my eye immediately by the cover. Then I found out about the TOC and saw the fantastic line-up and knew it’d be great. I’ve never reviewed an anthology story-by-story before, so there might be some minor spoilers ahead - be warned. I tried to keep as many significant plot details out as I could, but some of the stories are very short.

Everyone’s heard of The Road: stories, myths, legends. It’s rumored to be the “make-out mecca” for the small town of Hale. But no one’s actually found it, so it must not actually exist, right? Cassidy finds out otherwise and the trick is, you must be invited.

This story is a strong opener to the anthology. I really enjoyed this one and with hints of the supernatural I wasn’t sure where it was going.

Culling the Pigs by Chad Lutzke

This story drops us right into a woman’s escape from an abusive husband, where she must now flee (because the law is the law), and figure out what to do next. But will she ever be safe?

Lutzke is no stranger to writing about abuse/survival, so I wasn’t surprised to see his name in the TOC (but I was happy to see it there!). This story is very short but hits hard, right until the very end.

Never underestimate a woman with talent. An aspiring movie star finds herself in a real-life “creature feature”. I really enjoyed this one and loved all the movie references.

In Forrest Butter, we’re introduced to a married couple (who are clearly unhappy together) looking for a motel after a long day on the road. After the wife, Evelyn, is unhappy with the first room they are shown, they are taken to the “suite” upstairs. Everything is great at first, but there is that funky smell…

I loved this one. It made my skin actually crawl. I got some Sleeping Beauties vibes too (for reasons that will become obvious) which is also a plus, as I think I am in the minority group that loved that book.

A mother finds herself bound to a tree at the hands of her fifteen year old daughter and her deadbeat boyfriend. The rebellious teen has had enough of her mom’s attempts at getting rid of the boyfriend and plans to stop her from ever trying anything like that again.

This one was quick, but intense. Canon’s writing is great and really makes you feel like you’re the one who needs to escape.

A man is on a plane and he’s the only one left alive. He’s not sure how long he’s been flying, but has a rough guess by the tally marks he’s made on a cocktail napkin. The plane seems alive, somehow, and is going to need more fuel if it is going to remain in the air.

This one had me intrigued right from the start. I had no idea what was going on or where it would be going - was it supernatural or something simpler than that: just evil?

Laney - which may or may not be her real name - is a young girl held captive by this monster, Blick. They get stopped on a snowy evening, and Laney knows this might be her only chance for escape. What follows is a look into the mind of someone who has been through the unthinkable and will do whatever it takes to stop the monster once and for all.

In this packed story, we’re introduced to Mrs. Cleaver, who suspects she’s being poisoned by her husband. What follows, is a wild series of events that might solve all of Mrs. Cleaver’s problems. There are no dull moments and suggests that sometimes, to survive, just means to live another day. Dearborn is a new author to me but I’ll definitely be checking out more of her work.

Discussions Concerning the Ingestion of Living Insects by Ronald Malfi

This story had me questioning what was real and what wasn’t - the entire time. It reads like a fever dream and I loved it. Soon-Lee is a wounded soldier left in an evacuated hospital and, as he’s slipping further and further into delirium, he’s recalling how he ended up there. I won’t go into how the insects mentioned in the title come into play, because I think they add to the gut-punch ending, but this was one of the more unsettling stories in the bunch.

The Hand of Violence by Lucas Mangum

Isolde is running for her life. Picture the protagonists trying to escape in The Hills Have Eyes or Wrong Turn, and that’s what Mangum’s story immediately feels like. Visceral and raw, you can feel the world around her as she must - somehow - escape the legend of Slater Mars. We need more mutant hillbilly stories!

A Flock of Crows by Nate Kenyon

Lincoln Roth is working on a cure for a new strain of the bird flu that has taken over and basically caused an apocalypse. From his home lab, which sounds like a tech-filled bunker, he’s able to monitor the destruction outside while testing his new cures. Jessica is a stranger he saved in the midst of all the initial chaos of the outbreak and they’ve been stuck in Lincoln’s apartment for 9 days now.

Jessica and Lincoln are opposites. Jessica wants to try her luck outside and Lincoln wants to wait it out. He’s a pessimist, she’s an optimist. When she does decide to leave, he’ll have to save her again, and that’s when things get crazy.

This was one of the longer stories in the collection, but it didn’t feel dragged out. I though the twists were clever ultimately brought an emotional punch.

This story. What I thought was going to be a “zombie romance” turned dark quick. I was legit getting angry at this neckbeard’s justification for what he was doing. I think I got too caught up in the “holy shit what am I reading” to see the ending coming. Saying this was one of my favorites in the collections feels weird because of the content (and some might expect a trigger warning on this one), but it was a roller coaster of a ride for sure. These are stories of survival after all…

Into the Night by Hunter Shea

It is my opinion that this is the scariest story in the lot. Alien abduction is my jam and I’ve long considered The Fourth Kind to be one of the scariest (if not the scariest) movies I’ve ever seen. That shouldn’t be a spoiler itself since Mr. Shea tweeted about it himself.

In this story, Vance and Kara are a married couple who are now adjusting to their new lives as their kids have all moved out. When Vance starts getting headaches, he thinks nothing of it - he used to get migraines, though it’s been a while. Then things get really weird: he wakes up and his vasectomy has been surgically reversed. As Vance and Kara try to navigate what is happening to them, it only gets worse.

One thing that really stood out to me was the characters here. I fully expected one of the two to be skeptical of the other, or not believe the other, or have these crazy happenings drive them apart. But no, this is a couple who sticks together and by not using the tired trope here, we end up with a horrifying, original, and clever story.

Hunter, if you ever read this: please write a full-length alien abduction novel! 👽

Chrysalis takes place in some distant wasteland, where the human population is dwindling & struggling to survive. Angelo is our main character and narrator, and he is the one who takes care of the sick children.

Youers’ story is beautiful, dreamlike and heart-breaking. His novel, Westlake Soul, is perhaps my favorite book of all time, so I wasn’t surpised to find myself devouring this story.

She smiled. Always beautiful. It was no small wonder that God was reaching for her.

It’s difficult to put into words what its like to read a Gwendolyn Kiste story. Everything I’ve read from her, I wish it would never end. I don’t know how else to explain it: her writing is just beautiful.

In The Princes She’s Forgotten we’re introduced to a witch who lives in a castle by herself. She longs to break free from a spell that’s been cast upon her: anytime she is killed, she is resurrected. Because of this curse, she has lived for years (lifetimes, perhaps) and essentially repeats history over and over with princes who try to rescue her, and then ultimately betray her… until she meets one prince who is different.

This was my favorite story in the collection.

Handle with Care by Brian Kirk

Whew! This collection ends with a banger. Patrick is adopted and doesn’t know exactly where he came from. His large family has a reunion every 5 years and we’re currently at Patrick’s 3rd reunion. We aren’t given a ton of details right away but we know his cousin Emily passed away sometime between now and the previous reunion and that her and Patrick had become “kissing cousins”, which was sort of a joke because they weren’t related by blood. But now Patrick’s uncle is introducing everyone to Gary, who is the recipient of Emily’s heart. And Gary is starting to receive some of Emily’s memories…

I don’t want to give too much away here, but I was hooked and couldn’t wait to see where this was going. I haven’t read any of Kirk’s other works, though I do have a paperback copy of Will Haunt You sitting on my TBR right now, so it’s only a matter of time.

This was a fantastic anthology, and I highly recommend everyone pick up a copy. I was lucky enough to win a copy of this book from Alien Agenda Publishing and found an awesome note from Glenn Rolfe inside!