I’ve always wanted to build a Christmas lights display that lit up to music - those were always the coolest houses to drive by every year; and I knew if I put something together like that, my kids (and probably neighbor kids) would love it. I wanted to document my journey building this, mostly for the sake of having some notes to reference at a later point, but maybe it’ll be helpful for someone else just getting started.

The first part is pretty routine with any Pi project. You need to set up your Pi with an OS (I used the official imager and installed the latest Raspberry Pi OS), and then set up your wifi/ethernet connection and enable ssh.

The next step is to install LightshowPi, instructions for which can be found on the Reddit Wiki. The install consists of updating packages, cloning a git repo, and running install scripts from therein. I did all this over ssh, which seems to be the easiest approach.

For the first test, I wanted to verify that I had everything install correctly. The relay comes with LED indicators, and LightShowPi comes with a test script you can run to flash the LEDs to ensure the wiring is correct:

Here’s how I tested: 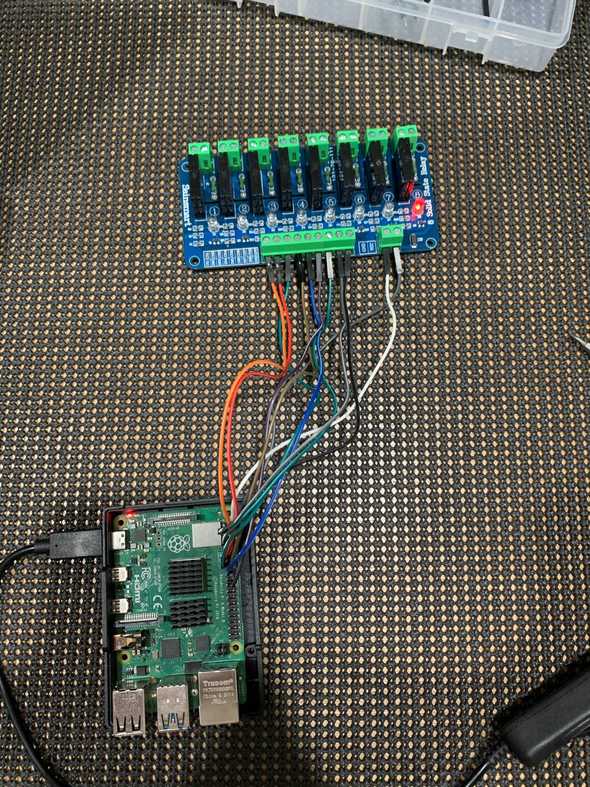 I ran into a couple issues, both of which were thankfully already mentioned under the Wiki’s Common Issues. I specifically ran into both #2 and #3 in that list. In both cases, I was able to edit the files mentioned and try again.

Protip: Edit files on the Pi with sudo nano {file} works great if you have no other options. However, if you’ve got VS Code installed and are working over ssh anyway, the Visual Studio Code Remote Development Extension Pack makes this a lot easier. Using this extension, you can connect to your Pi and open up the git repo folder from there. Editing/saving files in VS code feels much more familiar and makes things like searching, find + replace, etc. much simpler.

I’m intentionally skipping over the wiring of my outlets to the relay. The reason is I’m not an electrician and what I’ve done here should not be copied if you do not know what you’re doing. It is very likely I’ve done something wrong, or it is not “up to code”, etc. but I’ll be iterating on and improving this each year.

My main goal was for this to be somewhat portable. On /r/LightshowPi, I’d seen a few people mention they packaged their wiring into a tote or tool box of some sort and it just so happened that I had a spare toolbox that wasn’t being used. I immediately go to work cutting out a spot for the 4-gang outlet box and another hole on the side. The idea is that when I put everything away, I can simply unplug the extension cords and pack the toolbox away.

(For my future self)

Playing around with LSP for the first time this year, I used the following commands most often:

xmas.cfg is the name of my Christmas config overrides file.

And finally, the cron schedule I used this year:

(Note that you need to set your Raspberry Pi’s date/time/region settings to make sure you’re in the right timezone).